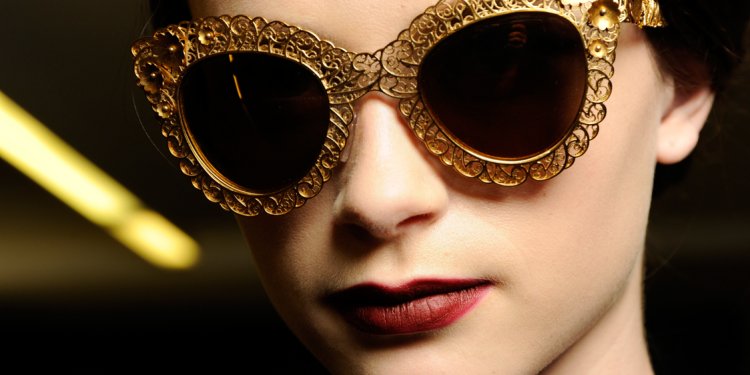 While sunglasses are an essential year round, there is no outfit that is complete in the summertime without a hot pair of sunglasses, they name the look complete. In fact, whenever the sun is shining, you will look naked if you aren’t wearing this seasons hottest trends. It seems as if the sun gets brighter, sunglasses become even more of a major accessory. They transition to actually becoming part of your summer style instead of an extension of it, which is essentially why it’s so important to pay attention to the sunglasses trends at this time of year.

Sunglasses initially made their big splash in the 1950’s where they were spotted on every movie star that mattered. While they were created to solve the problem of the sun getting into your eyes while you were outside enjoying a beautiful day, they became popular as a fashion accessory. Overall, other than handbags, sunglasses are the most functional accessory of all time.

During the 1950’s, people loved to shop more than ever! Women were at home being housewives while men went to work, and a good portion of their day was spent catching up on the latest trends in magazines with their neighbors. This lifestyle quickly led to the need to shop being more prevalent. There were emerging trends for both men and women such as fedora hats for men and tighter dresses for women, but everyone was buying sunglasses!

The first popular style to sweep the nation was the cat eye silhouette, which remains dominant today going in and out of style as each year progresses. Each new style was seemingly introduced through Hollywood, as it played as much of an impactful role then as it does now, and has truly come full circle. Lastly, sunglasses are an accessory that can easily be played off as high end even when they are from a budget level designer.

While we were all in awe of the very bold and fierce cat eye sunglasses that Audrey Hepburn introduced through her glamor in the 1950’s, the look has taken a softer spin for summer of 2014, but in a very dominant way. While this has always been an ultra feminine silhouette, often times it has been a little bit too much for people, which is why designers have reinvented this look for summer 2014.

On the lower end, brands such as ASOS have taken this silhouette, created thicker frames and a not quite as pointy and over exaggerated cat eye shape for the lenses. On the much higher end, designers such as Dolce & Gabbana have totally transformed the lenses to be much more similar to a classic square shape, only to be pointed in the top corners near the eyes. Both high and low end designers are mixing things up a bit by stepping away from a traditional thick, black frame and making them more modern with pops of color intertwined throughout. Even with these modern day embellishments, the cat eye frame remains a retro inspiration.

This is a style that we saw being introduced in the 1970’s during the free loving hippie era that we haven’t seen play a big role in the fashion industry again; until now that is. This trend was all over the Fashion Week runways so we are sure to be seeing this everywhere this summer from high end designers such as Gucci all the way down to more affordable options like Urban Outfitters.

Originally when this style was first introduced, we saw very slim frames with no thick lining, and the lenses were even featured in different colors! When it was reintroduced in the early 90’s, we saw designers promote smaller round frames which became very popular on celebrities Courteney Cox and the Olsen twins! In current day, designers are sticking with your basic black and brown lenses, but adding details to the frames such as thick plastic to make them pop.

During the 1960’s the style of Jackie Onassis Kennedy dominated the way that women dressed and what accessories they used. It was during the time that the sunglass style started to shift into round that eventually the Wayfarer style was born and became very dominant in this market. Oversized sunglasses were born at this point and still haven’t gone away.

Wayfarer sunglasses were first seen on men and Hollywood’s elite, Bob Dylan and Andy Warhol, making this a more masculine trend, yet sexy and androgynous whenever women wear it in current day. This retro style is very popular currently from the Ray-Ban brand, as they pretty much dominate the market for this style. For summer 2014, they have added neons and prints to their Wayfarer frames in order to make them look more modern, but the original retro style of solid black frames will remain popular and available.

Since sunglasses are a fairly basic and functional accessory, there is only so much that designers can do season to season to manipulate designs and make their frames exciting enough for people to purchase new ones. The most modern sunglasses trend on this list is the elegant details that designers are adding to their frames for summer 2014, making them chic, classy, and attention grabbing.

Some of the elegant details the designers are adding include soft colors, embellishments such as rhinestones, changing the colors of the frames, and lastly making otherwise thin metal frames thicker to create a more retro look. No matter which way you examine these new additives, everything circles back to them being elegant details for modern day glamor.

This season, the main designer to really take the trend and run with it is Versace, who also has featured Lady Gaga as their spokesperson for their new cool frames. They have taken a soft cat eye and added the elegant details of gold studs lining the face on a choice of many different colored frames and lenses. Versace has truly circled back to the original way that sunglasses were advertised and became popular on Hollywood royalty.

Every year, there is always a more futuristic approach to sunglasses that is taken by designers and brands that are willing to take the risk and try something new and innovative. This year the biggest trend (we use the word trend by meaning that it will most likely become very popular and then fizzle as soon as fall hits) we have to share is wooden frames for sunglasses.

They are surfer inspired and feature an ultra summer feel, so even if the trend remains strong, they will need to redo the framework for the colder months. The wood gives frames for summer 2014 an element of surprise, since no one is expecting to see people wearing wood on their face. Nonetheless, it is a strong trend that is drawing attention from both consumers and designers alike.

Higher end designers such as Ray Ban and department stores like Nordstrom are capitalizing on this trend to serve their beach bum customers. We will also see lower end mass market brands such as ASOS producing these accessories to make them accessible to all!

How does one tell the gender of sunglasses? - Quora

The size of sunglasses is measured in the lens size, across the lens horizontally in mm.
The Ray Ban Small Aviator, RB 3044 is a 52mm lens.